Last September, the works of the Residencial Alto de Los Lagos were delivered as part of the Urban Renovation and Human Integration Project of the Province of Colon.

This project is a public initiative aimed at promoting the center of the city of Colón as a commitment to social development, urban reorganization and the improvement of the quality of life of the Colonenses families.

With these works, 25,000 people have been beneficiaries of social interest housing. Altos de Los Lagos has been developed as a Garden City concept, with underground electricity, numerous sports areas, green areas and institutional buildings that provide social services to the population. 169 residential buildings have been built, each building has 5 floors and 6 apartments per level. In total, 3,000 Apartments with 3 bedrooms and 2,000 with two bedrooms, with surfaces ranging from 48 to 57 square meters.

As for urban infrastructure, 3 drinking water tanks have been built, two of 150,000 gallons and one of 1,000,000, a Wastewater Treatment Plant that is capable of treating 100 L / s has also been built. 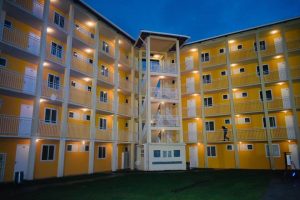 This is a work promoted by the National Government of Panama and executed through the Ministry of Housing and Land Management, awarded in 2015 to the Nuevo Colón Consortium, composed of the companies Odebrecht Engineering & Construction International and CUSA. It is a concept aimed at improving the quality of life of the Colonense population. It will have a Sub-Station of Police, Fire Station, Corregería de Cristóbal, commercial areas, infoplazas, future areas for Educational Centers, medical care and social care, green and recreational areas … During the development of the Urban Renewal of Columbus They have generated more than 2,500 jobs. To meet the demand of the project, continuous training programs have been developed in order to prepare and certify the men and women of the area as skilled workers in civil construction, which will also allow them to become agents of change of their own professional growth and improve their quality of life autonomously.

SISTEMA INGENIERIA since june 2016 and in Consortium with LCC INGENIERIA carries out the supervision of the works, and assisting MIVIOT in the control of the works

SISTEMA has collaborated in the ADAPTaRES Program