The Project consists of the execution of a new road to link the towns of Agaete and Aldea de San Nicolás, improving travelling times and user safety. The standard section of the road is of two 3.5 metre lanes, with hard shoulders of 1.5 metres, except in two sections in tunnels, where a further lane is incorporated, to undertake the splitting off of the Gran Canaria road towards the tourist zones located to the south-east, with a length of 6.30 km. The section will be dual carriageway with two 3.5 metre lanes each, and a varying width median.

Due to the irregularity of the terrain to be crossed, in the original project it was foreseen that seven pairs of tunnels would be built, representing a total length of about 8,000 metres of the total 12,600 m (6,300 for each direction), meaning approximately 60% of the route in tunnels. Furthermore, three viaducts were foreseen which represent around 9% of the total length.

The Modified project arises from the need to meet the following requisites, arising during the execution of the work: 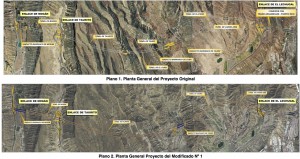